Once every two months, International Center Tilburg and Cinecitta organize Expat Cinema.
The film evening for internationals in Tilburg!

On April 15 we present the film Olga (with English subtitles). The event starts at 8 pm and will end around 11-12 pm.

Everyone knows about the war in Ukraine. Much has been written and said about it. Before the film screening, we give the stage to a few speakers who will shed light on this topic. Proceeds from this event will be donated to humanitarian aid in Ukraine (Save Life in UA).

The first speaker will be Polina. She is one of the five Ukrainian students who managed to set up a successful fundraising campaign for emergency supplies. It delivered a total of 81 pallets of supplies, which came down to three trucks. First aid kits, personal care equipment, medicines, flashlights and batteries were collected. A total of 150 volunteers contributed to the campaign: students, teachers, support staff and local residents. Curious about how this fundraiser came to be? Come listen to this special story. Polina will also share her personal experiences with the war in Ukraine.

The second speaker is dr. Hans Siebers. He will connect with us through a Zoom connection. The war in Ukraine and the response to it from Europe raises many questions. The support for Ukraine is necessary and heartwarming, but also forces us to look critically at our compassion towards other refugees in the Netherlands. Why do Europeans receive Ukrainian refugees more generously than refugees from Syria, Iraq or Sudan? Nationalism determines that difference. Those boundaries are arbitrary and are drawn according to the political will. That is the view of Professor Hans Siebers, who argues for the abolition of nationalism in refugee and asylum policy. He even advocates open borders and a free migration policy. There will be an opportunity to ask questions after the lecture.

Hans Siebers works at Tilburg University and is the director of the master programme Management of Cultural Diversity, Tilburg School of Humanities and Digital Sciences, and teaches on management of cultural diversity, management and organization, labour relations, ethnicity and diversity.

The 15-year-old Olga is one of the best Ukrainian gymnasts of the moment and a champion in the making. She can think of nothing but training for the European Championship that is getting closer and closer. But when her mother’s journalistic work begins to endanger their lives, Olga is sent to a host family in Switzerland for her own safety. With a good dose of dedication, magnesium and tightly taped wrists, Olga throws herself into her gymnastics routine to secure a coveted spot in the Swiss team.

When the Euromaiden protests erupt in Kyiv – with her mother and best friend on the front lines – Olga is torn between her sporting ambitions and the love for her native country. Olga is a moving story about physically strong yet mentally vulnerable young gymnasts, set against the political backdrop of the Ukrainian revolution in 2013. Debut director Elie Grappe worked for Olga with real gymnasts. None of them had acted before. Olga premiered at the Cannes Film Festival and is the Swiss Oscar entry.

“Olga is, in her troubled way, emblematic of Ukraine’s yearning for a new European identity, a peaceful and prosperous modernity and a (very Swiss) neutrality, in which its independence can be cocooned. In its unexpected way, this film speaks to the new agony of banishment now being felt by millions of Ukrainians, and to the profound unease and concern and impotence spreading westward across Europe.”
– ★★★★ The Guardian 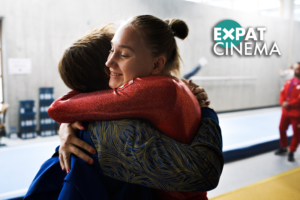 After the film, International Center provides the opportunity to stay and talk. At Cinecitta there is a beautiful seating area where you can sit and talk comfortably.